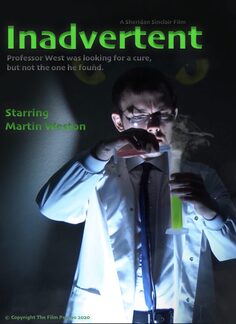 Inadvertent is the first short film I have directed since 2017.

With time on my hands during the 2020 lock down, I decided to look at some of my earlier short films to see if I could reedit them  to tighten them up a bit.
One of these was an entry to a 24 hour film challenge entitled Negating Fear (2014).

It was going to be tricky as I only had the completed films & not all the individual files.
​During the editing process, I found that there were a few essential shots which let the film down due to lighting. So I contacted the actor & asked if he would be interested in re-shooting these few shots once restrictions began to ease.

Long story short, but it was decided to update the script & re-shoot the whole film.

The concept is essentially the same as the original, but now a little more Lovecraftian.
To maintain safety, the film was shot with a 3 man team: Main Actor - Martin Weston, Director/Support Actor - Sheridan Sinclair, & Cinematography provided by Regijus Simkevicius of www.rsproduction.co.uk/
Proudly powered by Weebly